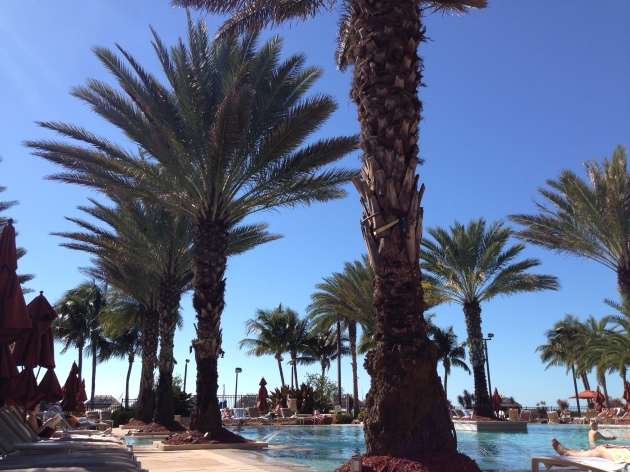 Days 2 – 4 of the Advances in Genome Biology and Technology meeting (AGBT) meeting were packed with great talks and insightful comments #AGBT14. For a summary of day 1 check out our earlier post. We’re just going to give a brief digest of the talks we attended and will update this blog post as we fill in more details.

Day 2 at the Advances in Genome Biology and Technology meeting (AGBT) started off with a cancellation of the much-anticipated talk by Evan Eichler on “Advances in Sequencing Technology Identify New Mutations, Genes and Pathways Related to Autism”. Dr. Eichler studies gene duplication and DNA transposition within the human genome. We’re assuming that what he was going to present was just published this month, “A de novo convergence of autism genetics and molecular neuroscience”. Let us know if you know otherwise or when Dr. Eichler is speaking again!

Stephen Fodor, founder of Affymetrix announced a new approach for quantitation of mRNA transcripts in single cells. The method utilizes a single tube endpoint assay and allows for precise measurements of transcripts without the need for cycle to cycle real time measurements or physical partitioning (digital PCR). The procedure works by encoding all mRNA molecules with molecular barcodes allowing the user to amplify their samples and not worry about duplication rates. Pixel™, the name of their device is described in more detail in their white paper.

Hiroyuki Aburtani presented a lecture on applying epigenome profiling and single cell transcriptome analysis and demonstrated that Wnt / B-catenin signaling switches transcriptional networks and re-organizes the epigenome into specific pluripotent lineages. Their analysis is designed to improve the understanding of cell fate during differentiation.

David Jaffe’s much anticipated talk on the assembly of bacterial genomes using long nanopore reads generated a significant amount of interest. David presented data on two bacterial genomes, methylation negative E. coli and Scardovia. His conclusion was that the data was not useful by itself for de novo assembly, but he speculated on applications that would benefit from data where 84% of reads had at least a perfect 50-mer. This talk was nicely summarized by two other blog posts: The one and only Oxford Nanopore talk at AGBT 2014 – with real data and Oxford Nanopore Data and MinION: Valentines Day’s Gift to Genome Enthusiasts.

Gene Myers discussed a new assembler called the “Dazzler” (the Dresden Azzembler) that can assemble 1-10 Gb genomes from PacBio RSII data. The advantages for the new assembler are that it can scale to Gb genomes 100 fold faster than current assemblers and it has a “scrubbing phase” that detects and corrects read artifacts that can cause problems with long contiguous assemblies. A nice summary of this talk is described in Dale Yuzuki’s blog post: http://www.yuzuki.org/favorite-talk-agbt-2014-gene-myers-max-planck-dresden/

Hessam Esfandyarpour from Genapsys, presented on what they call a “truly cost-disruptive sequencing platform”, the GENIUS 110 System. Backed with just under $50 million in venture funds from Yuri Milner, DeChang Capital and IPV Capital, the GENIUS system uses nano-electronic technology (clonal amplification as opposed single molecule sequencing) combined with unmodified nucleotides and polymerase to generate “long reads”. They announced the Genius Club, an early access program, to test the instrument. While he did talk about consumables, three chips with 1Gb, 10Gb and 100Gb, he didn’t show much data. We’ll have to wait to hear more.

Jeffery Schloss, director of the division of Genome Sciences at the National Human Genome Research Institute gave a talk on “Ambitious Goals, Concerted Efforts, Conscientious Collaborations – 10 Years Hence”. His talk began with a graph measuring the cost per base on the y-axis and the years from 1990-2005 on the x-axis. He reiterated their strategic plan of Base pairs to Bedsides: http://www.genome.gov/Pages/About/Planning/2011NHGRIStrategicPlan.pdf. Schloss’s talk was nicely summarized in a recent Dale Yuzuki’s post.

We’re in the process of updating and adding summaries of talks from AGBT 2014. Check in again !

The first day of the Advances in Genome Biology & Technology (AGBT) meeting kicked off with an introduction by Eric Green, Director of the National Human Genome Research Institute. He announced that this 15th annual meeting was the largest ever with 850 expected to attend. The opening plenary session certainly did not look like 850 people in attendance. Winter Storm Pax wreaked havoc on flights coming in from Atlanta and other cities, resulting in several speaker and general attendee cancellations.

The plenary session began with scheduled talks by Aviv Regev, Jeanne Lawrence, Wendy Winckler and Valerie Schneider. Jeanne Lawrence couldn’t make it, which was a shame particularly since she gave a brilliant talk at ASHG on using a single gene XIST to shut down the extra copy of chromosome 21 in Down syndrome. This work was nicely summarized in a publication that came out this summer titled: Translating dosage compensation to trisomy 21.

Aviv Regev and Wendy Winckler’s talks were subject to a blog/tweet embargo (unclear whether Regev’s talk was completely under embargo or only the last half, we’re playing it safe and not discussing it here), leaving Valerie Schneider’s presentation the only one that was tweeted or written about. This instantly created great angst among those attending the lectures, those stuck in airports enroute to AGBT and those at home waiting for in depth coverage.

Single-cell sequencing, considered the “method of the year” by Nature Methods was the basis of the opening lecture. Aviv Regev offered an excellent view of the dendritic cell network based on cyclical perturbations and variations between single cells. Regev’s first half of her presentation titled, “Harnessing Variation Between Single Cells to Decipher Intra and Intercellular Circuits in Immune Cells” was largely covered by her publication in April, “Single-cell transcriptomics reveals bimodality in expression and splicing in immune cells”.

The second talk, by Wendy Winckler was not allowed to be discussed or tweeted according to Winckler, courtesy of Novartis’s communications department. The title of her presentation “Next Generation Diagnostics for Precision Cancer Medicine” wasn’t revealing either. To get an idea of what she’s up to and the direction of her lecture, you can read these recent publications.

The final talk by Valerie Schneider, titled “Taking advantage of GRCh38” began with an analogy to an unwanted pair of socks one receives for Christmas that ends up being used and finally really liked. “It was time for an update….whether or not it was on your wish list”. We were reminded that centromeres are important specialized chromatin structures important for cell division, but because of repetitive regions, they are not represented in reference assemblies. Previous versions of the human reference assembly had centromeres represented by a 3M gap. The latest assembly, GRCh38 incorporates centromere models generated using whole genome shotgun reads as part of the Venter sequencing project. Since there are two copies of each centromere for each autosome, these centromere models represent an average of two copies. She concluded her presentation urging users to switch now: http://www.ncbi.nlm.nih.gov/genome/tools/remap.

After a short break from the talks, the closing reception sponsored by Roche began outside. Halfway through, there was a brief yet sudden Florida thundershower that sent the entire AGBT community scurrying indoors for shelter. That was okay though because the conversations just continued indoors. Looking forward to tomorrow morning’s lectures. Several of the ones we’ve highlighted will be up.

The yearly genomics pilgrimage to Marco Island begins next Wednesday from Feb. 12th until the 15th. The 15th Advances in Genome Biology and Technology (AGBT 2014) Agenda was released last week, it’s guaranteed not to disappoint. We expect the following lectures to be the most interesting:

-Single cell genomics is becoming an extremely useful tool, we’re eager to hear more on the first day of the meeting.

– Her talk was the most tweeted plenary lecture during ASHG 2013 and it was great! A must go!

– Dr. Eichler studies gene duplication and DNA transposition within the human genome. This is going to be a good talk.

Beth Shapiro, University of California, Santa Cruz
“Paleogenomes, Ice-age Megafauna, and Rapid Warming: How Genomes From the Past Can Help Predict the Consequences of the Future Climate Change”

– The paleogenomics section of the recent PAG conference was excellent. I expect this to be an interesting lecture as well.

– What’s next from the founder of Affymetrix? For a preview check out their paper that came out this month on molecular indexing for quantitative targeted RNA-Seq.

– Looks interesting. Hoping to get a preview from his blog: CoreGenomics.

– Expecting to see some of the first Nanopore data here !

Hesaam Esfandyarpour, Genapsys, Inc.
“The GENIUS™ Platform: A Next Generation Sequencing Platform That Exceeds Quality and Cost Goals for Universal Deployment In and Out of Core Laboratory Environments”

– The latest NGS platform, Genapsys just got $37M in series B financing.

Genohub will be in attendance and tweeting @Genohub. Send us a message and let’s meetup to talk NGS !