Currently, there are two long read sequencing platforms. To help a researcher choose between which platform has greater utility for their application, we compare overall instrument specifications offered by PacBio and Oxford Nanopore, and published applications in the next-generation sequencing space. 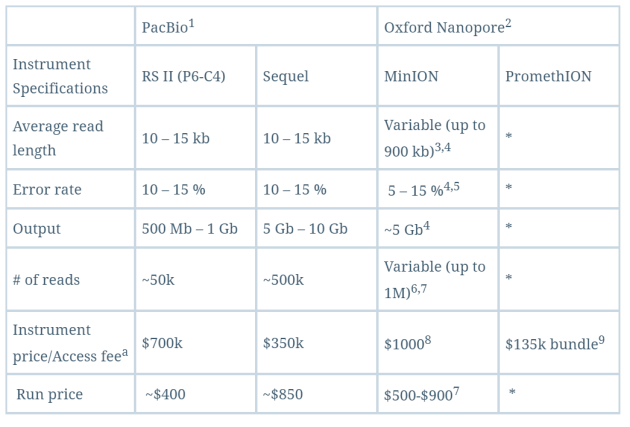 Although both PacBio and Oxford Nanopore generate longer reads compared to short read Illumina or Ion sequencing, the higher error rate of both the PacBio and Oxford Nanopore sequencers remain an issue needs addressing. Whereas PacBio reads a molecule multiple times to generate high-quality consensus data, Oxford Nanopore can only sequence a molecule twice. As a result, PacBio generates data with lower error rates compared to Oxford Nanopore. PacBio has a slightly better overall performance for applications such as the discovery of transcriptome complexity and sensitive identification of isoforms. On the other hand, MinION provides higher throughput as nanopores can sequence multiple molecules simultaneously. Hence, it is best suited for applications that require a larger amount of data9

As long reads can provide large scaffolds, de novo assembly is one of the main applications of PacBio sequencing5. Though the error rate of PacBio data is higher than that of short read Illumina or Ion sequencing, increased coverage or hybrid sequencing can greatly improve the accuracy of genome assembly. PacBio sequencing has been successfully used to finish the 100-contig draft genome of Clostridium autoethanogenum DSM 10061, a Class III, the most complex genome classification in terms of repeat content and repeat type. It has a 31.1% GC content and contains repeats, prophage, and nine copies of rRNA gene operons. Using a single PacBio library and sequencing it with two SMRT cells, an entire genome can be assembled de novo with a single contig. When short read Illumina or Ion sequencing was used alone with the same genome, >22 contigs were needed, and each of the assemblies contained at least four collapsed repeat regions, PacBio assemblies had none10.

PacBio sequencing of PCR products can be used to improve the quality of current draft genomes by closing gaps and sequencing through hairpin structures and areas of high GC content more efficiently than Sanger sequencing13.

Pacific Biosciences has developed a protocol, Iso-Seq, for transcript sequencing. This includes library construction, size selection, sequencing data collection, and data processing. Iso-Seq allows direct sequencing of transcripts up to 10 kb without the use of a reference genome. Iso-Seq has been used to characterize alternative splicing events involved in the formation of blood cellular components14. This is essential for interpreting the effects of mutations leading to inherited disorders and blood cancers, and can be applied to design strategies to advance transplantation and regenerative medicine.

Another major application of PacBio sequencing is in epigenetics research. Recent studies demonstrate that investigation of intercellular heterogeneity in previously undetectable genome DNA modifications (such as m6A and m4C) is facilitated by the direct detection of modifications in single molecules by PacBio sequencing15.

Compared to PacBio, the Oxford Nanopore MinION is small (size of a USB thumb drive), affordable, utilizes a simple library prep and is field portable16. This is useful in situations such as a virus outbreak where a mobile diagnostic laboratory can be set up using MinIONS. In remote regions such as parts of Brazil and Africa where there are logistical issues associated with shipping samples for sequencing, MinION can provide immediate and real-time data to scientific investigators. The most notable clinical use of MinION has been the analysis of Ebola samples on-site during the viral outbreak in West Africa17,18.

The low cost of sequencing and portability of the MinION sequencer also make it a useful tool for teaching. It has been used to provide hands-on experience to students, most recently at Columbia University and the University of California Santa Cruz, where every student performed their own MinION sequencing19.

Perhaps the most ambitious MinION application is its potential to detect and identify bacteria and viruses on manned space flights. In a proof-of-concept experiment, Castro-Wallace et al. demonstrated successful sequencing and de novo assembly of a lambda phage genome, an E. coli genome, and a mouse mitochondrial genome. They observed that there was no significant difference in the quality of sequence data generated on the International Space Station and in control experiments that were performed in parallel on Earth22.

Recently, Oxford Nanopore developed a bench-top instrument, PromethION, that provides high-throughput sequencing and is modular in design. It contains 48 flow cells that can be run individually or in parallel. The PromethION flow cells contain 3000 channels each, and produce up to 40 Gb of data.