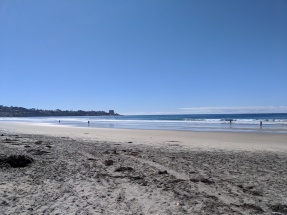 Right next to the conference location!

It’s hard to imagine a better conference setting than the Scripps Research Institute, where you can listen to scientific talks while literally sitting right next to the beach! It’s even better when those talks are as interesting as they were. The FOGM conference covered a lot of ground:

Dr. Juan Carlos Izpisua Belmonte discussed his latest findings using the homology-independent targeted integration (or HITI) to target non-dividing cells–a key feature that means it could be used to treat adults and not just embryos. He has previously shown that they could insert treat rats with retinitis pigmentosa using this system, and they showed improvement in their ability to respond to light and healing in their eyes. In his talk at the conference, he was also able to use this same technique to alter the epigenetic landscape of mice suffering from progeria, a genetic condition that induces rapid aging, and show improved organ function and lifespan. He hopes to use this discovery to move us towards eventual treatments for the symptoms of aging–the one disease that we all suffer from. See here for the full picture.

Dr. Paul Knoepfler presented an elegant model of epigenetic effects in pediatric glioma. Pediatric gliomas are nearly 100% fatal even with the best treatments, and the treatments are incredibly severe. Children with this disease are given the same treatments as adults, but what if the tumors are different?

Well, it turns out that they are different. Dr. Knoepfler showed that pediatric gliomas frequently possess two unique point mutations in histone H3.3, and that these mutations aren’t seen in the adult gliomas. It seems astonishing that these two point mutation can convey such incredible lethality, but in fact, even small histone mutations can be incredibly lethal because of the effect on the epigenetic landscape (seen via ChIP-seq by Bjerke et al).

So, Dr. Knoepfler wanted to see if reversing these two mutations in these cancer cells could reverse the phenotype, and additionally, if doing the opposite (causing those two mutations in normal brain cells) would induce the cancer phenotype. In fact, in both cases, either reversing or causing those mutations caused an immense transcriptional shift in the opposing direction, indicating that these two point mutations are enormously important in this cancer type. Dr. Knoepfler wants to use this information to create mouse models and test new drug treatments to see which of them can be most effective against this particularly aggressive cancer. 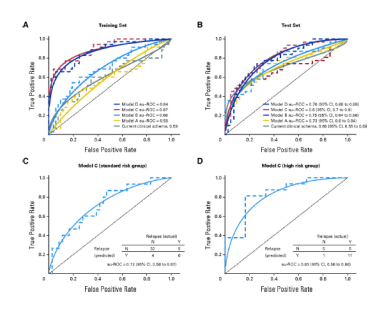 Dr. Jill Mesirov also gave a very informative talk regarding pediatric brain tumors. Her lab applies machine learning and statistical techniques to find molecular markers to aid in the identification and stratification of cancer subtypes. She examined the RNA profiles from several pediatric medulloblastoma tumors using RNA-seq and found 6 different subtypes in the RNA profiles with vastly different survival rates. Using this model, she was able to categorize 15 patients that were diagnosed as ‘low-risk’ using traditional diagnostic methods as actually being ‘high-risk’–and 6 of these patients went on relapse within 3 years. Dr. Mesirov wants to use this model to help identify novel therapeutics for the particularly deadly myc-driven cancer subtype, and hopefully improve clinical outcomes.

Bonnie Rochman’s talk focused more on the sociological effects of modern genomic medicine, particularly with respects to having children. She asked some tough questions of the audience regarding prenatal testing for Down’s syndrome, or early childhood screening for genes like the BRCA1/2 genes, which predispose a person to breast cancer. Additionally, our ability to gather genomic data far outpaces our ability to accurately interpret said data, which leads to a lot of anxiety around what all this genetic testing actually means. She concludes that ultimately, there are no right or wrong answers regarding this subject–everyone has their own thoughts and feelings, shaped by their experiences with their own genetics. You can read more in her book here.

Those were my favorite talks from the first day….check out the Day 2 summary tomorrow!