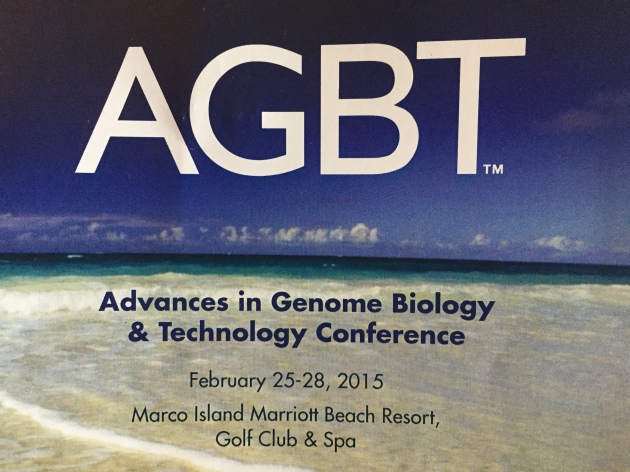 Day 2 of the Advances in Genome Biology and Technology Conference (AGBT 2015) began with high expectations as plenary speakers in day 1 set the bar high with engaging lectures.  The first talk in the morning was by Evan Eichler who described human genetic variation by single molecule sequencing. He generated 40x sequence coverage of a haploid human genome with average read lengths of 9 kbp. His method allows for the detection of indel and structural variants from several bases up to 20 kbp. Comparing his single haplotype to the human reference he resolved some ~26K indels at SVs at the basepair level. His analysis found complex variations such as mobile element insertions as well as inversions. His results suggest systematic bias against longer, complex repetitive regions can now be resolved. According to Eichler, ‘we need to capture SVs to make precision medicine, precision’.

Next, Nuria Lopez-Bigas spoke about analyzing thousands of tumor genomes to identify cancer drivers and targeted therapeutic opportunities. She claimed that 90% of tumors have at least one driver mutation, with differences between tumor types. Some of these tumor types like melanoma have many drug opportunities while others like renal carcinoma have few. 36% of patients could benefit from targeted drugs for more than one driver. She described the release of a beta version of Integrative Onco Genomics, Intogen that uses mutations from several sources: tumor mutation data from ICGC, driver id methods from OncodriveCLUST, and mutation mapping by Ensembl VEP.

Substituting for Meredith Carpenter, Carlos Bustamante talked about PhenoCap, a targeted capture panel for comprehensive phenotyping of forensic DNA samples. PhenoCap allows the prediction of phenotypic traits ranging from autosomal ancestry to facial morphology. Bustamante’s group aims to make PhenoCap analogous to a forensic exome that provides a comprehensive profile for all sample types.  General utility of forensic DNA is hampered by heavily degraded and contaminated samples making traditional STR and PCR approaches unreliable, PhenoCap solves this. Another part of his talk focused on the eastern Indian slave trade, specifically sequencing of DNA from a slave cemetery in Mauritius and the broad diversity of ancestry discovered.

The last talk before lunch was by Eric Green from NHGRI on the new ‘US Precision Medicine Initiative’ (PMI). He thanked the organizers for keeping a place for him despite his reluctance to give a title or description of what he wanted to talk about, it was before PMI was even announced at the State of the Union Speech. He started by emphasizing President Obama’s longstanding interest in genomic medicine. As a senator he tried to pass a bill called the Genomics and Personalized Medicine Act in 2006. What was announced was $200M for FY16, $70M for cancer studies near term and $130M for long term cohort work, sequencing of 1 million volunteers. What doesn’t add up are the costs to sequence 1M people and the budget allocated for this. 30x WGS: $1,750 x 1M people = ~$2B, will there be more funds for this initiative? $200M falls short. Checkout Francis Collins (left most, pointing to the TV) watching the State of the Union at his home.  He wasn’t sure exactly what President Obama would say. 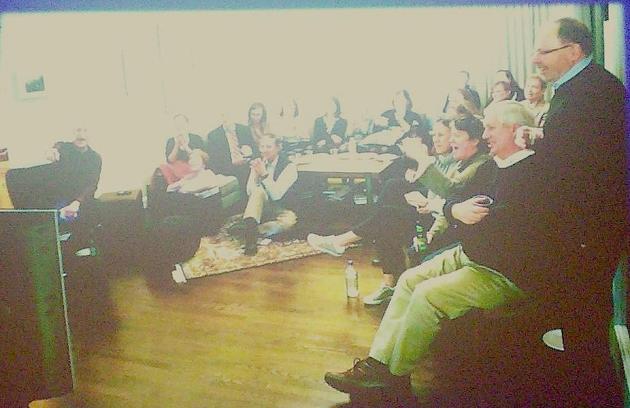 Sarah Tishkoff gave the next talk on adaptive traits in Africa. A nice summary of this work can be found here: Genetic Variation and Adaptation in Africa: Implications for Human Evolution and Disease. Her findings on GC biased gene conversion and its importance in population genetics is described in a recent paper: Biased Gene Conversion Skews Allele Frequencies in Human Populations, Increasing the Disease Burden of Recessive Alleles.

David Page next spoke on what single haplotype iterative mapping and sequencing (SHIMS) tells us about sex chromosomes. He started by describing all genes that are involved in sperm production as palindromic copies on the Y chromosome, the longest being 3Mbp. The male specific region of the Y chromosome (MSY) sequence reveals lineage- specific convergent acquisition and amplification of X-Y gene families, potentially fueled by a fight between acquired X-Y homologs. He also spoke of the goal to make reference grade sequencing of structurally complex regions faster and more affordable. His work, Sequencing the Mouse Y Chromosome Reveals Convergent Gene Acquisition and Amplification on Both Sex Chromosomes was recently published in Cell late last year.

Then next plenary talk in evolutionary genomics was by Erich Jarvis on the challenges of sequencing representative genomes for an entire vertebrate lineage. As part of the Avian Phylogenomics Consortium (>200 researchres, >120 institutions), he collected and sequenced genomes of 48 avian species representing nearly all orders. He pinpointed the rise of modern birds from mass extinctions and described the convergent expression of 55 genes in birds and human neurological regions as related to vocal learning. Much of this work is described in 8 articles in a special issue of Science called, A Flock of Genomes.

The next last two talks of the plenary session were by Jessica Alfoldi and James Bradner. Jessica’s presentation, Evolution Two Ways: Natural And Artificial Selection showed that changes in allele frequencies of non-coding ancestral variation allows for bursts of speciation in cichlids and behavior changes in rabbits, both on short time scales.  Bradner’s talk was on the  disruption of ‘super enhancers’.

The concurrent sessions began in the evening with topics in biology, informatics and cancer. Hopefully someone else will write about the informatics and cancer sessions. The biology session began with Hie Lim Kim describing WGS of five Nambian Khoisan individuals and a  population analysis study using a 420K SNP dataset to show that two genomes contained exclusive Khoisan ancestry. Climate data along with sequencing indicates an ancient split in modern humans. Karyn Meltz Steinberg’s talk was on exome sequencing of 20,000 Finns. The ability to detect genetic associations with Finns is improved due to a bottleneck that resulted in enrichment of low frequency, deleterious variants. Using three different analysis pipelines they generated a genotype consensus call set and identified several potentially novel associations with plasma adiponectin and plasma CRP levels. Charlotte Lindqvist presented a genome scale study of population dynamics and speciation in polar and brown bears. She found evidence for functional speciation related to cellular respiration, hibernation and pigmentation. Beth Shapiro presented her work on brown and polar bear interspecies hybridization, Matthew Blow talked about sequencing based approaches for genome scale functional annotation and Max Seibold presented on integrated RNA-seq of the host and microbe in the nasal airway of childhood asthmatics.

Tomorrow the talks will clinical based, with concurrent sessions in technology, genomic medicine and transcriptomics. If you missed the first day at AGBT, check our summary of day 1.